The board of directors of Reykjavik Energy Group consists of six members. Five of them, including the Chairperson and Vice-Chairperson, are appointed by the Reykjavík City Council and one is appointed by the Municipal Council of Akranes. The local authority of Borgarbyggð nominates one observer to the Board, and the association of employees of Reykjavik Energy Group another.

The Chairperson of the Board may not take on any other positions at Reykjavik Energy Group.

The Rules of Procedure of the Board and the duties and responsibilities of the CEO dictate a division of tasks. The CEO of Reykjavik Energy Group cannot be a member of Board committees.

Here, members of municipalities' councils, that own part of Reykjavik Energy Group, are not presumed independent, neither are employees of the group that are members of Boards of subsidiaries. In Moody's rating of OR in September 2021, is however stated that "...we view the independence of OR's board as relatively weak. However, a published "ownership strategy" and well-defined financial policies, and the shareholders' track record of appointing nonpolitical external experts to the board, moderate the risk of political interference in the company's operations."

The ratio of independent representatives among Board members at Reykjavik Energy Group, has been unchanged since 2010.

Independent of the company or its owners 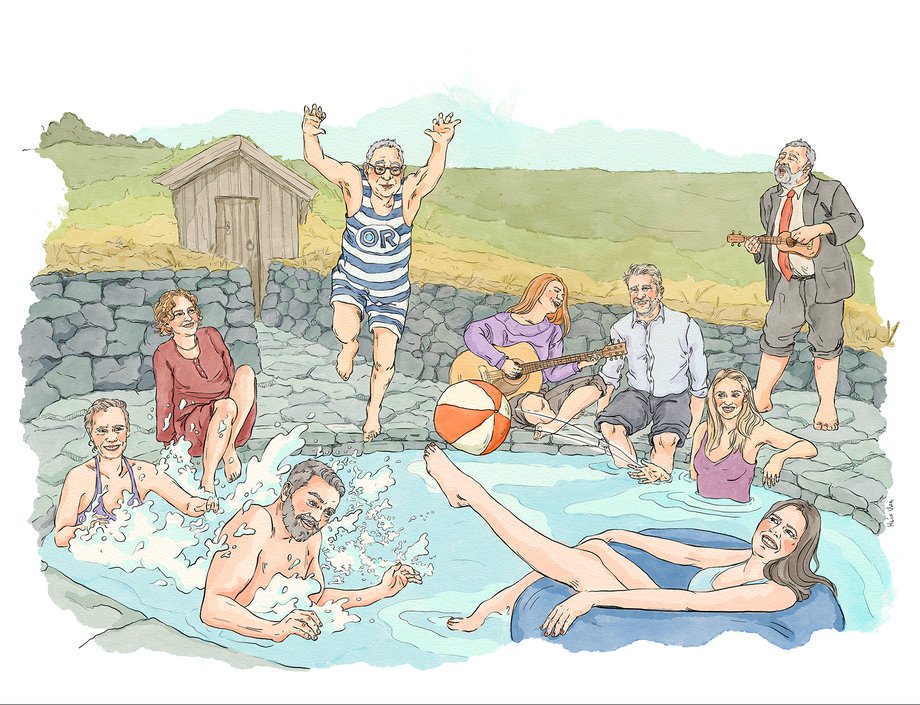 All the meetings of Reykjavík Energy's Board of Directors in the Covid-year 2021 were hybrid. Therefore, a group photograph of the BoD was not taken. A drawing by Hlíf Una Bárudóttir of the Board and the CEO bathing in the Snorralaug in Reykholt is in line with the Annual Report's swimming pool theme.

At the end of year 2021, these sat on Reykjavík Energy's Board of Directors:

Borgarbyggð Municipality and OR’s Employee Organisation have observers at board meetings. These are:

The CEO of Reykjavik Energy is Bjarni Bjarnason, geologist and engineer.

The Board of Directors of Reykjavik Energy Group places emphasis on transparency. The minutes from Board meetings and meeting documents, which are not confidential, can be accessed by the public on the Group's website. The minutes from Board meetings contain, among other things, a record of all the decisions made by the Board, and Board members have the right to have their positions on specific issues briefly noted in the minutes.